The global automotive industry was already in distress since 2018 witnessing declining passenger vehicle sales. The passenger vehicle sales dropped to 68.7 million (-2.9%) in 2018 and further drop was witnessed to 64.4 million (-6.3%) in 2019, which was worse than 2008-09. The COVID-19 pandemic further exacerbated the already stressed industry. The extended lockdowns across major automotive hubs globally during the first half of 2020 has resulted to further decline in the passenger car sales to 58.2 million (-9.6%). Although the second half of the year was well off as manufacturing and sales slowly resumed globally.


The setbacks are huge with impact on not only the sales targets but on the working capital, investments especially in the autonomous and connected ecosystem, and risk- taking capabilities of the industry. Certainly, the current trends are a matter of concern for the auto ecosystem, however, the industry is expected to get back on track with removal of lockdowns and economies functioning.

The manufacturing facilities are now slowly resuming, and the auto supply chain is recovering, but it will take time. Eventually the recovery should lead to rebound in imports and exports. The trend of over depending on one country will become more prominent and the OEMs are finding new spots for manufacturing capabilities. The post pandemic situation is still uncertain; however, it is clear that all the major economies both developed and developing are going through rough times. Piling debt on the countries is further going to negatively impact the economies and consequently affect the auto market. The economic situation of United States and countries in EU is expected to worst hit and would need a rapid recovery through better policy making. Rapid recovery is possible in auto manufacturing only if the supply chain is back on track and the demand starts picking up. But to get demand back in place, the economic conditions of the consumers’ need to get normal, which is still a distant future.

Few countries in the Asian region, especially China, quickly recovered back on track in terms of generating demand. From a more optimistic perspective, the year 2021 is anticipated to see a positive growth curve in terms of passenger cars demand. Still, auto industry would need minimum of 3-4 years’ time to regain the sales volumes of 2019, while some markets might even take almost 10 years. It is anticipated that the sales could grow by 3.7 percent globally, reaching 60.3 million cars in 2021.

Technological advancements in automotive industry have always been driven by the need for safety both inside and outside of a vehicle. The data on fatality due to road accidents across world shows how passive and active safety systems in vehicles has helped to reduce the death rates. The trend continues with new and emerging technologies being developed to make roads safer than before. Almost all the vehicles today on the roads are equipped with some kind of passive and active safety features. One of such features is driver monitoring system (DMS), which is developed to monitor the state of a driver, to alert or warn the driver in case of potential accident.

DMS systems initially were developed as a passive safety solution that monitors the state of driver based on steering wheel turning and driving trajectory. For instance, in lane keeping assistance system, the system warns the driver in case the hands are not on the steering wheel, or the car is leaving the lane by observing the driving pattern. Almost all the cars today on the road that are equipped with lane departure warning and assistance systems (SAE Level 1 and Level 2 systems) uses passive DMS for drowsiness or distraction monitoring. Although, such systems have been successful in avoiding fatal accidents, but they are not full proof. Best example could be Tesla’s autopilot system that uses steering wheel mounted sensors to detect the presence of hands continuously, and in case if it doesn’t, the system alerts the driver with audio-visual warnings. Other early examples include Attention- Assist (Mercedes-Benz); Driver Alert System (Volkswagen); and the first standard fit DMS – Driver Alert System (Volvo). Similar other systems are present on majority of other OEM vehicles. However, looking at the performance of passive DMS systems, industry soon realized the need for a better and more reliable solutions for DMS.

Active DMS, generally enabled by camera based near-infrared sensing technology, detects the driver's state from eyelid closure, blinking, gaze direction, yawning, and head movements. Active DMS also referred to as 3D in-cabin sensing or in-cabin sensing was first installed by Toyota using its innovative Driver Attention Monitoring System in luxury Lexus models (2016), which used an integrated dashboard camera to monitor the driver’s face. Second was from Cadillac in its Super Cruise CT6 Sedan (2017 model) using infra-red sensing solution. The software solutions was developed by Seeing Machine and was installed on steering from Joyson Safety Systems which is integrated with Osram's IR and LED components (Oslon Black SFH 4715S) for driver monitoring. Soon IR based in-cabin sensing for driving monitoring was installed on Audi A8, BMW X5 and Subaru Forester (2019 model), among few others.

According to M14 Intelligence estimates, the number of vehicles with active DMS or in-cabin sensing in 2019 was just 125 thousand cars. This number more than doubled to 280 thousand cars in 2020. The growth recorded was lower than anticipated due to the impact of the pandemic on the production and sales of new passenger vehicles.


With Subaru adding its DriverFocus solution in fleet of 2021 models of Legacy and Outback; Mercedes Benz in S-class; GM Cadillac in Escalade, CT4, CT5, Chevrolet Bolt EV and other 7 models; BMW in 5- series, X3, 3-series, X4, and Z4; Infiniti on QX50 and other few models; Ford on Mustang Mach-E and F-150 (Active Drive Assist); Nissan on Skyline Sedan (ProPilot 2.0) and Nissan Leaf; along with few others such as Hyundai, Volvo, Mazda, among others the demand for in-cabin sensing is estimated to skyrocket in 2021 onwards.

Estimates are in 2021, total number of vehicles with active DMS or in- cabin sensing will grow close to million units. The calculated compound annual growth rate between 2021 and 2030 is 48.3 percent which means demand for in-cabin sensing will rapidly grow to 27.1 million units by 2030 (see the graph below).

Looking at the total number of new passenger vehicles sold in the market globally, only 0.5 percent of the vehicles are equipped with in- cabin sensing systems for driver and occupant monitoring in 2020. This penetration rate is estimated to grow by triple digits in 2021 to 1.3 percent. By 2025, the total market penetration can reach to X percent of the new passenger vehicles sold considering all the major OEMs starts adding in-cabin sensing solutions in at least 2 to 3 models in their higher trim levels.

Of the total new passenger vehicles to be sold in 2030, M14 Intelligence estimates the penetration rate of in- cabin sensing technology could possibly reach to 33.7 percent, i.e. approximately three in ten cars by 2030 will have in-cabin sensing as a standard feature.


Trademarks are of the respective brands. This is not an exhaustive list. Please download the sample report for more information. 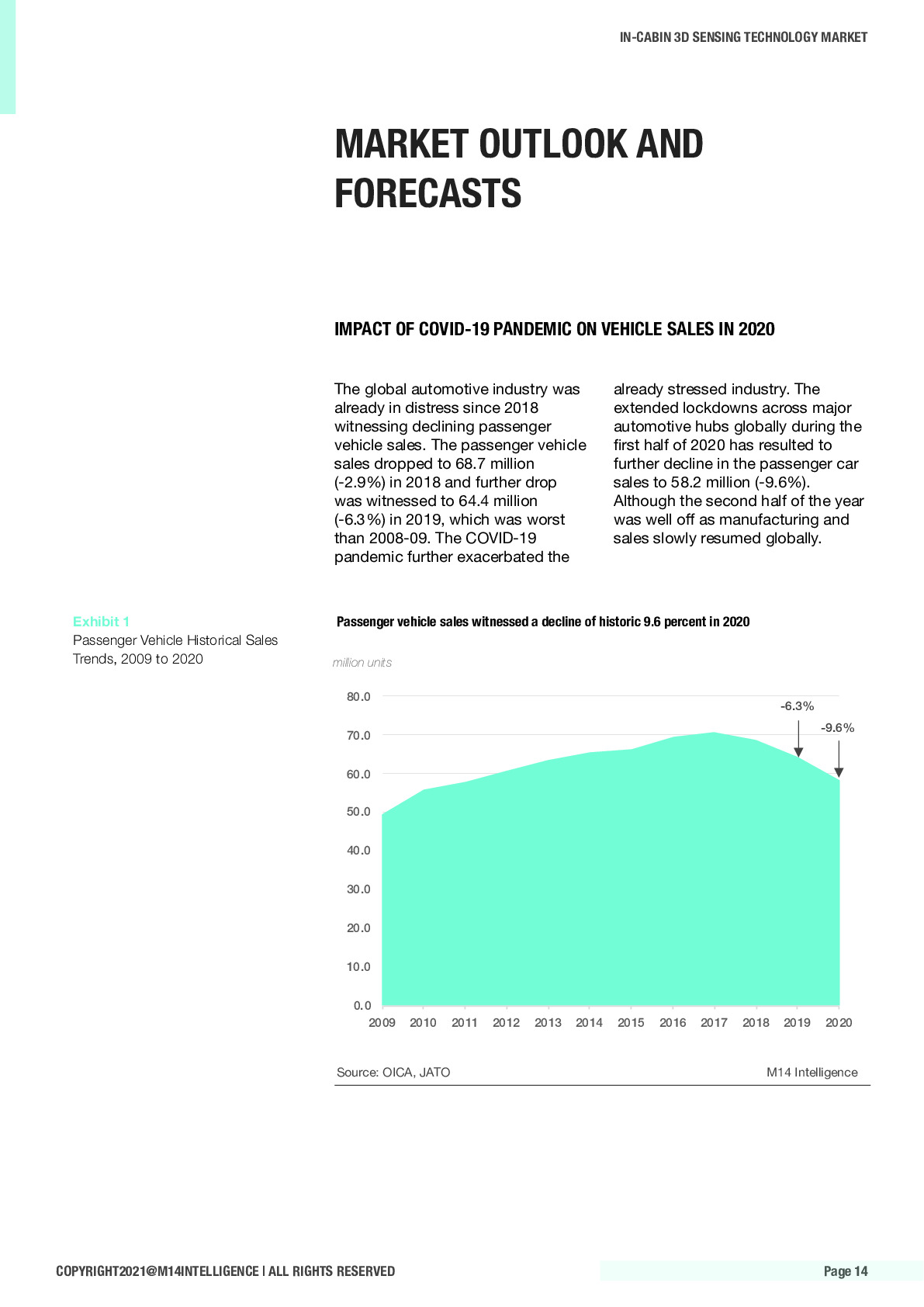 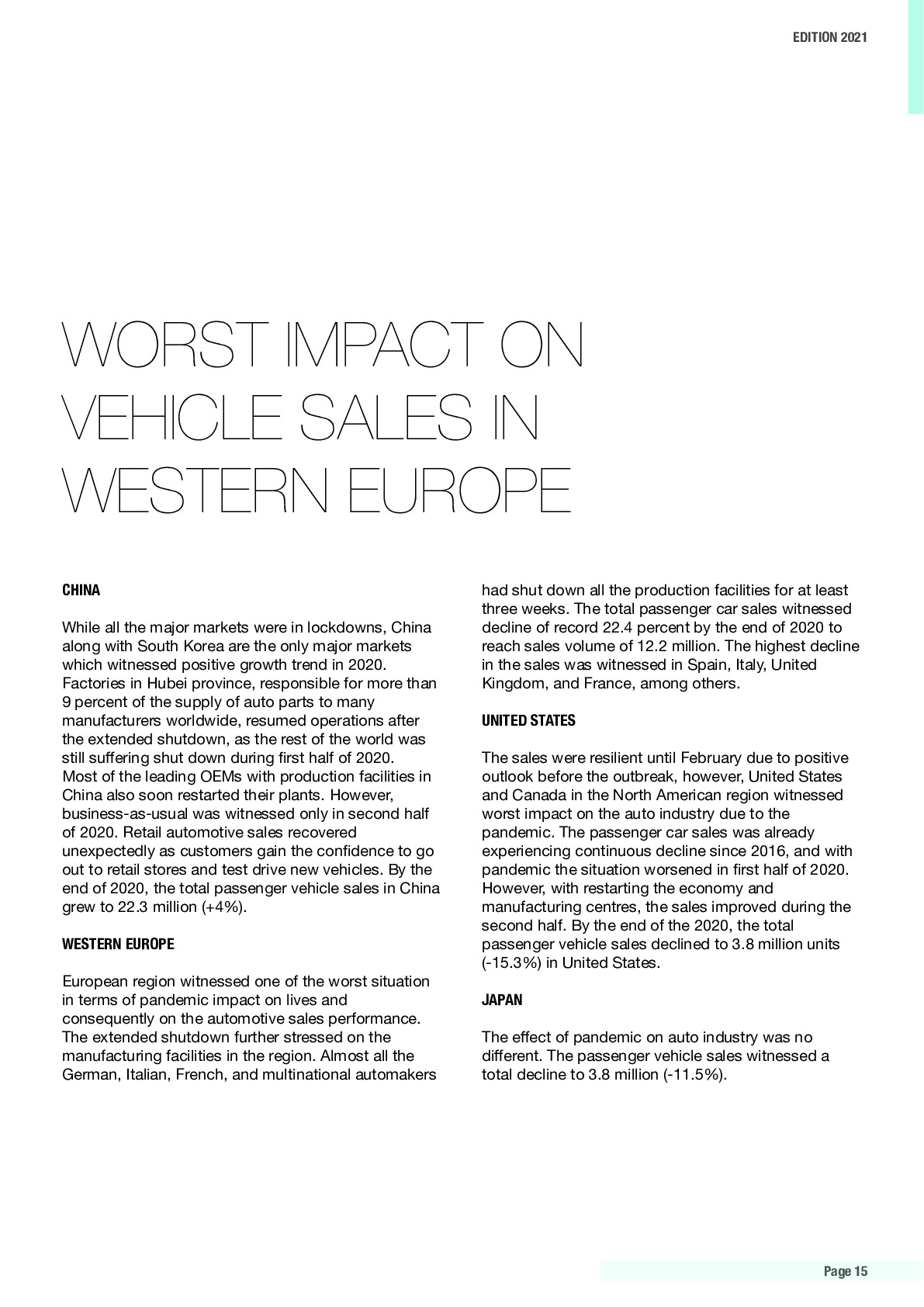 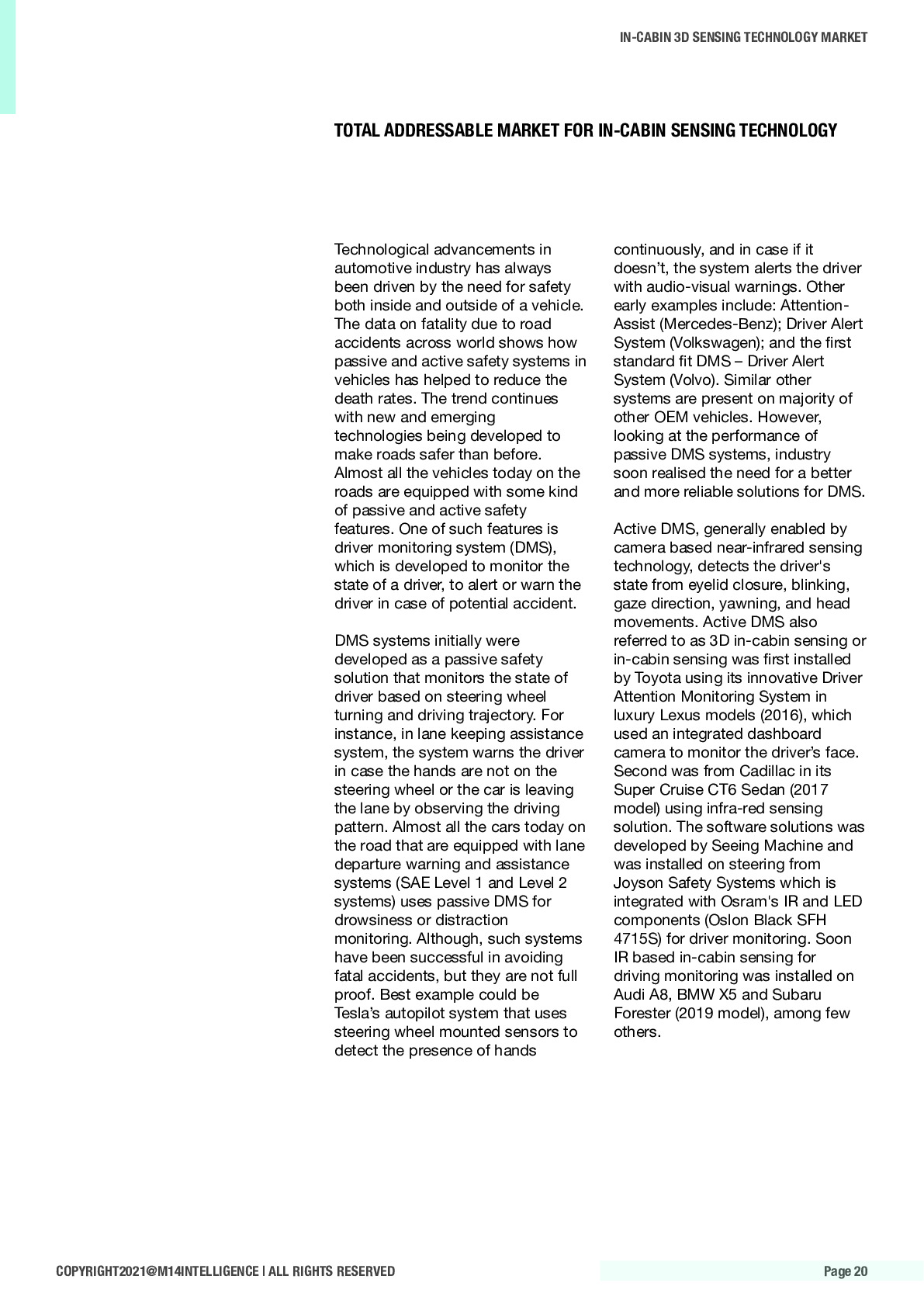 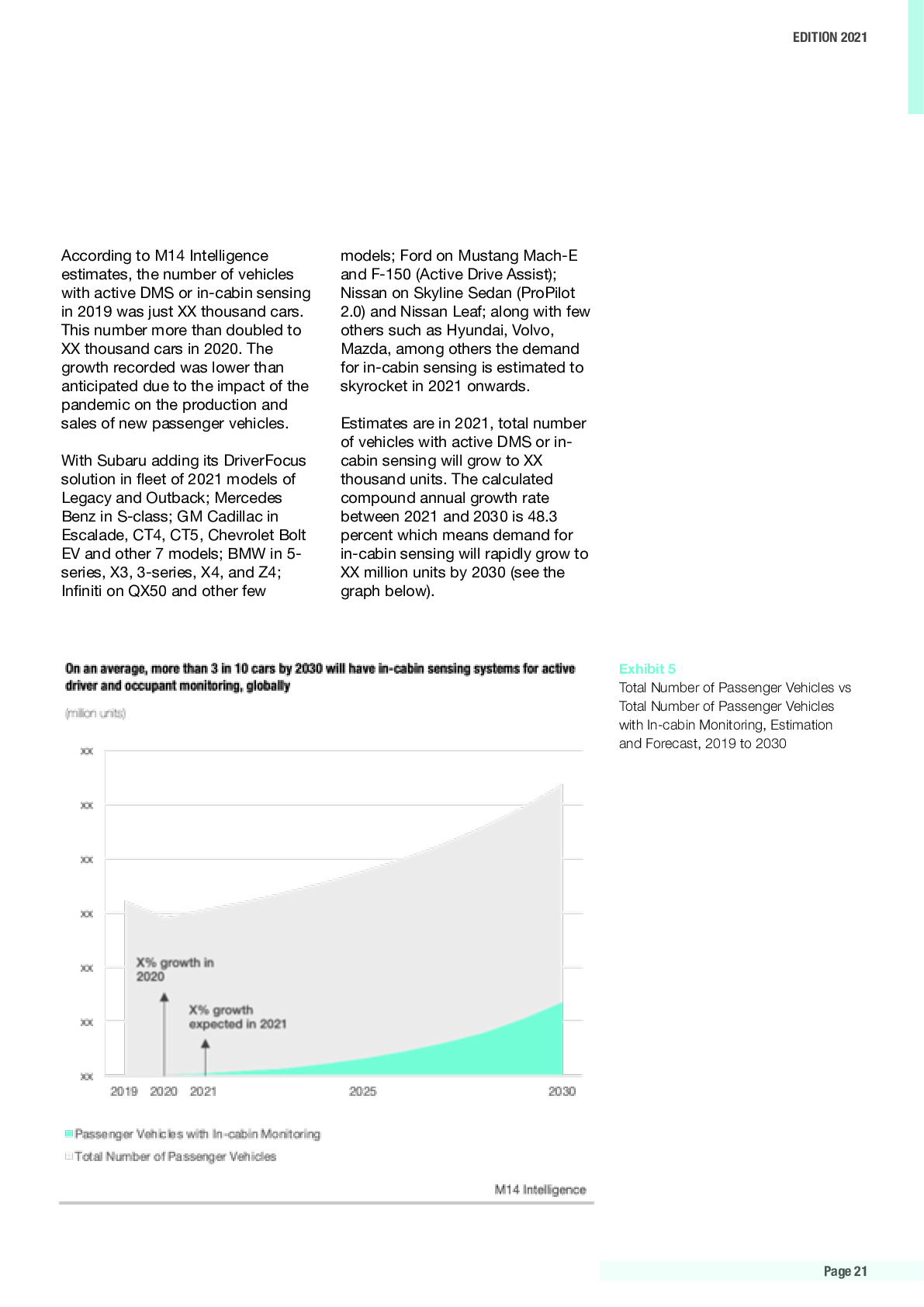 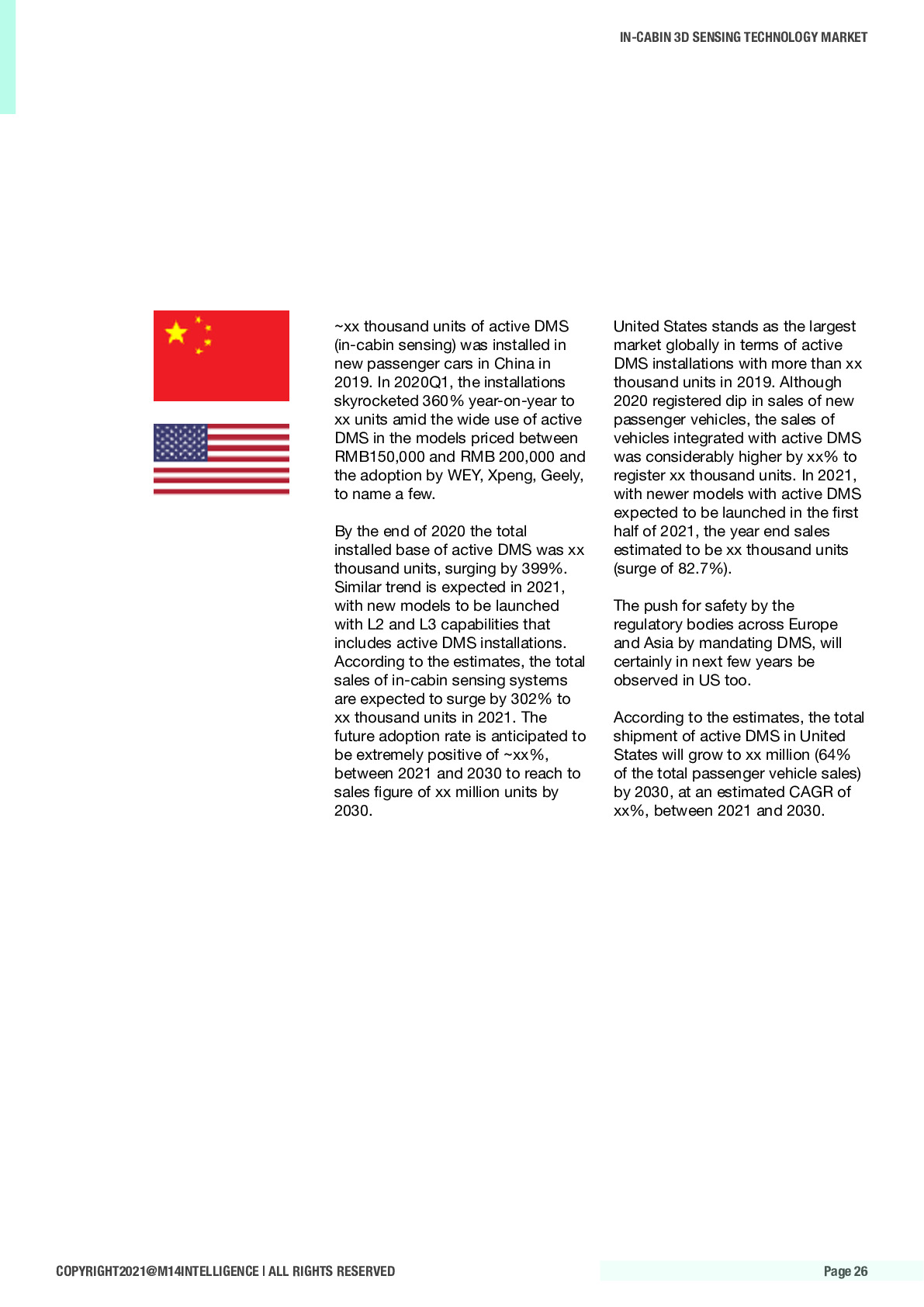 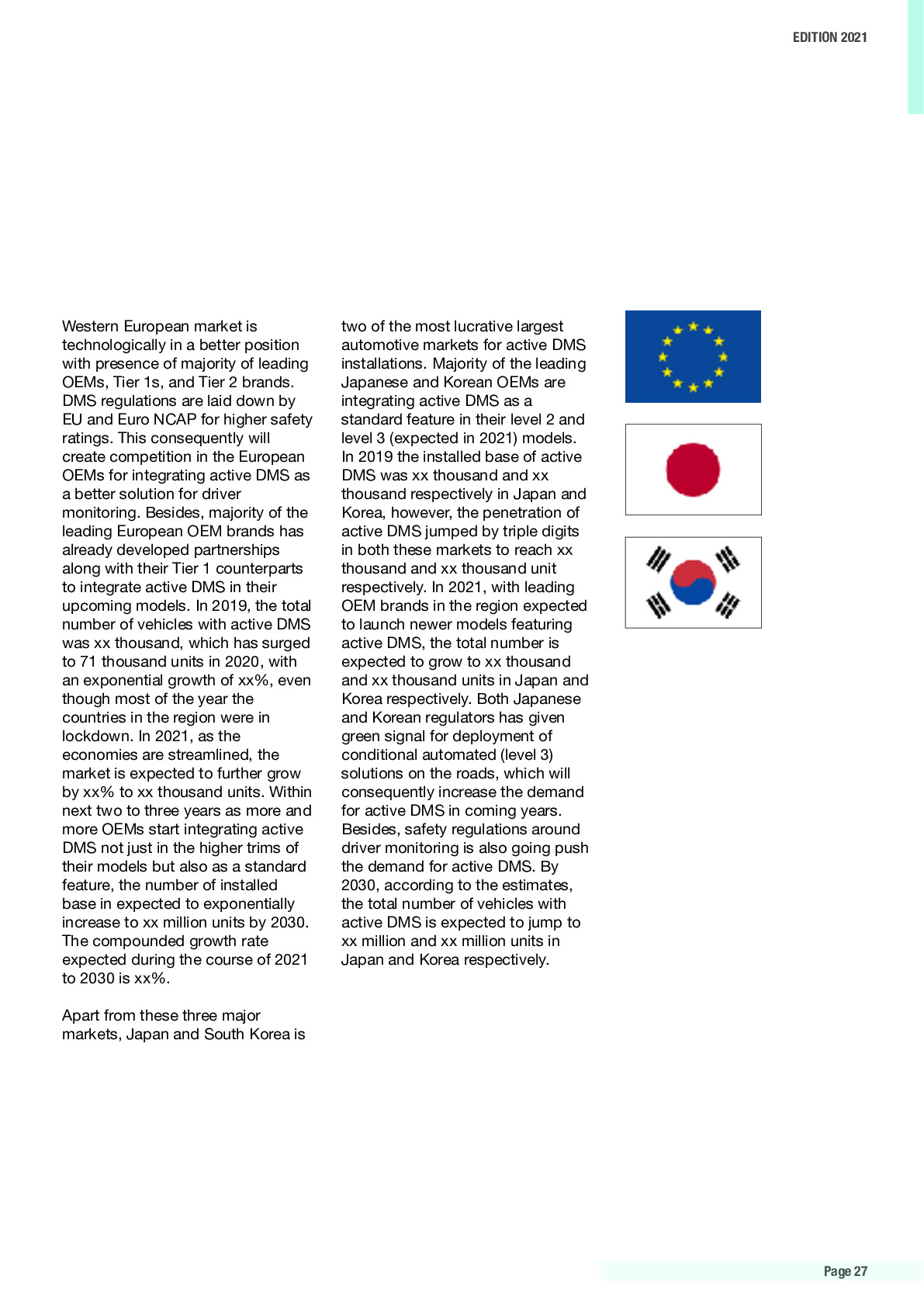 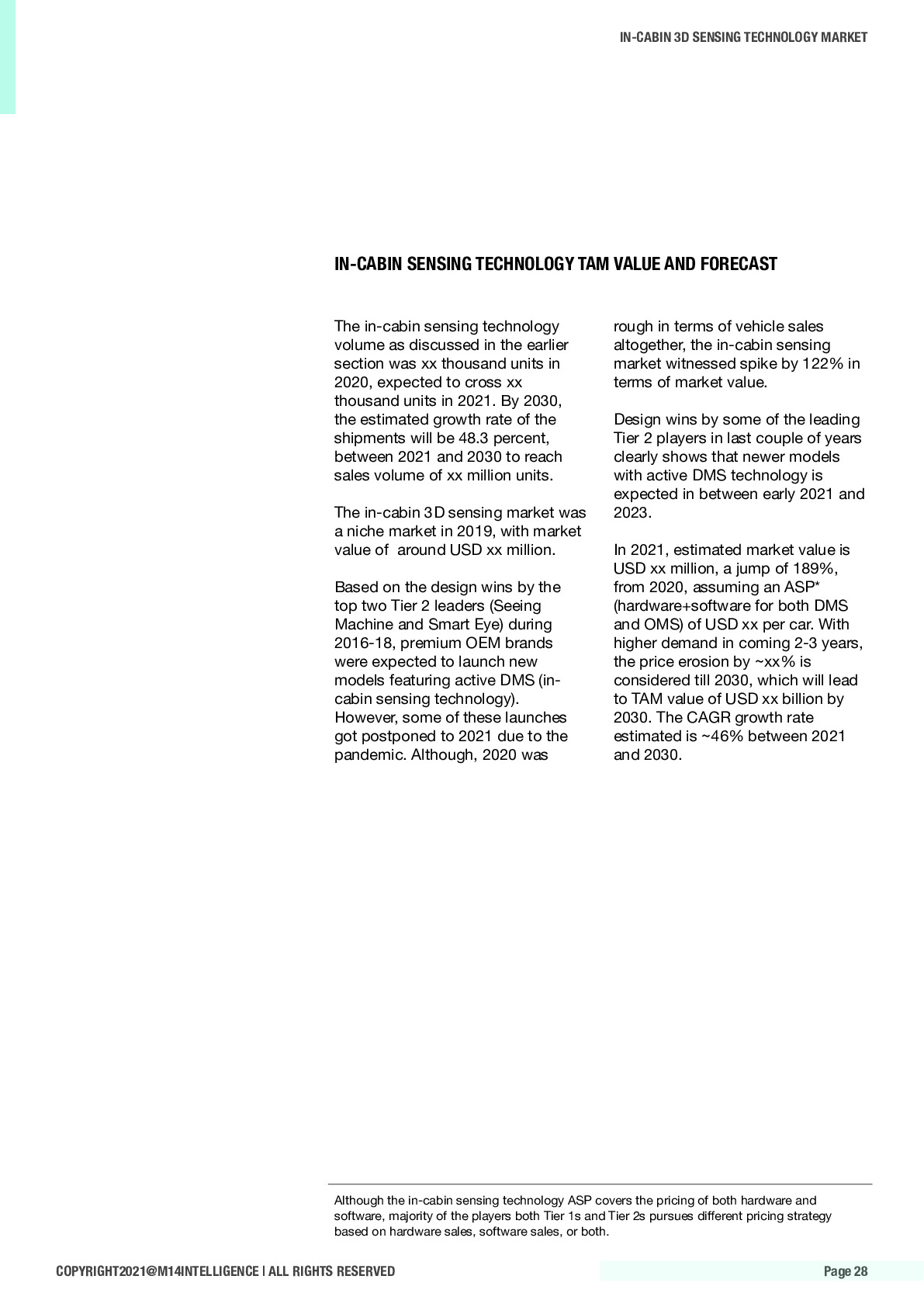 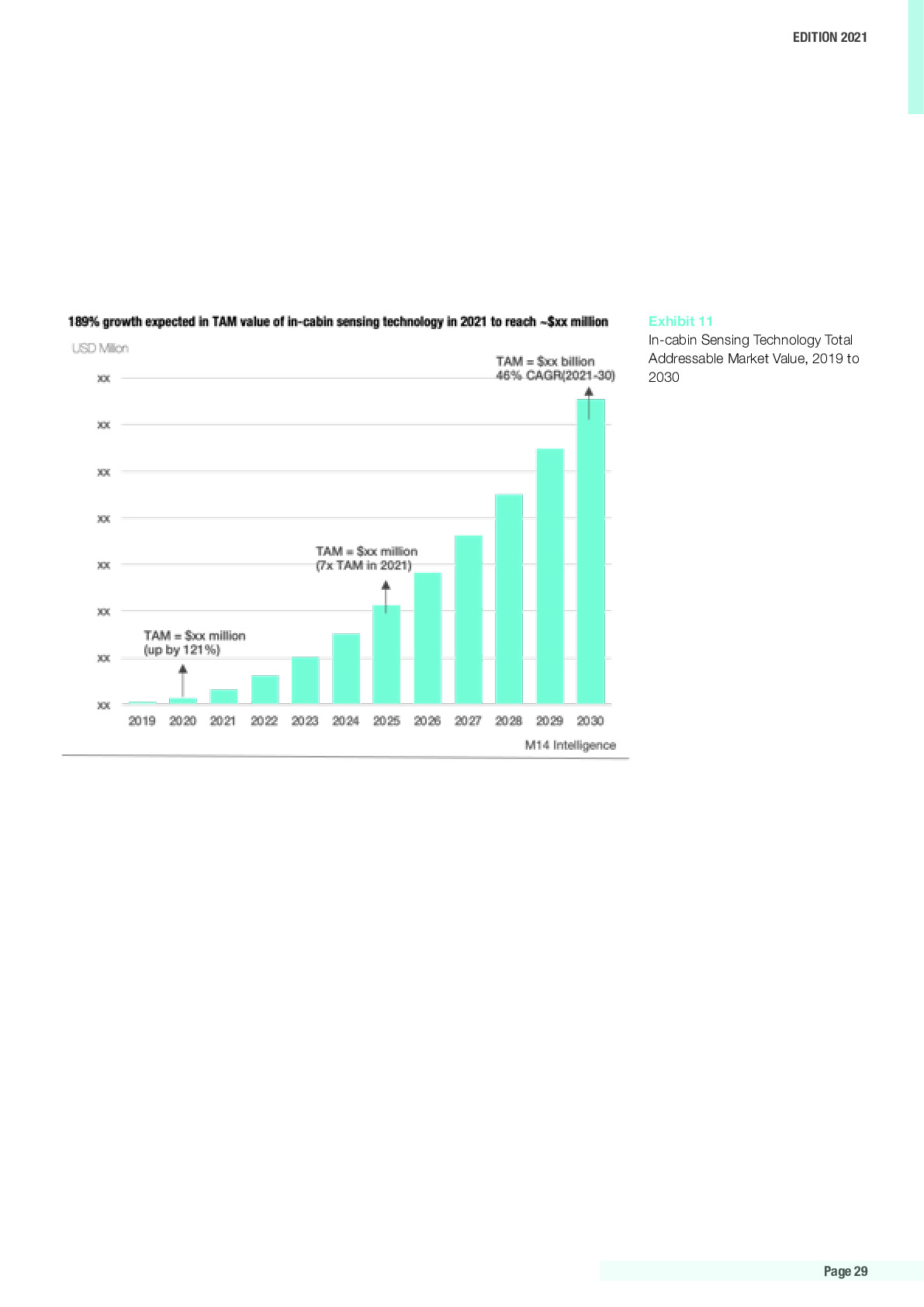